Jordan Spieth has maturity that is way above his 21 years. He is known to write hand written letters to people who have assisted him, and always seems to find time for charity events.

He also has incredible respect for his fellow players. No more than his good friend Zach Johnson.

Zach was surrounded by a huge crowd as he holed his final putt to take The Open Championship. Also watching intently was Jordan Spieth. Not long after the disappointment of missing the play off he was there to cheer on his friend.

After the formalities, the two boarded a flight together with friends to return home and celebrate. It looks like the celebration started straight away.

Johnson went on the Dan Patrick Show and talked about his flight home with Spieth, as transcribed by CBS Sports.

“We actually flew home together last night,” said Johnson. “It was … fun. It was interesting. We had a bunch of guys on the plane. Good friends — our sport may be odd. We try to beat other’s heads in but when it comes down to it we’re going to be the first to applaud and share in the moment.

“He was the guy most people probably wanted to have won and I get that too … He’s a better person, a better kid off the golf course. For him to be there on No. 18 after the playoff. It doesn’t really surprise me because I know his character, but it does speak volumes to how he was raised and certainly how he conducts himself and how he puts the game in perspective.

“He knows he’s not bigger than it. And he’s just a great addition to the great game of golf.”

By the look of the Facebook photo’s that were posted by Johnson’s caddie, Damon Green’s, it must have been some flight!

Good on you Jordan, you’ll be drinking out of your own Claret Jug before long. 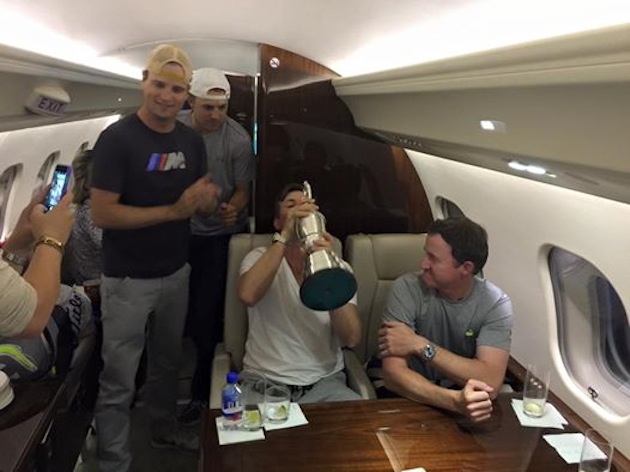