Strippers, of course… Golf truly is a game for gentlemen, and for gentleman’s clubs it seems…

The White Pines Golf Club, situated in the leafy suburbs of Chicago recently played host to the ‘inaugural’ Pink Monkey Strip Club golf outing, a racy annual event that now seems to be getting a lot of unwanted attention.

This year CBS ran an investigation into the event and they were able to obtain some rather colorful video and images. Even with the knowledge the course is surrounded by schools and parks, the event holders still thought it was appropriate to have these adult entertainers perform in full view of the public. In the end the strippers were hired to perform, and perform they did. 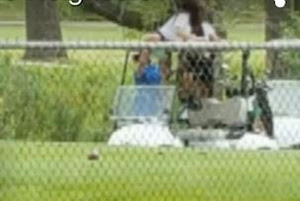 Paul DeMichele, a local resident had this to say,

“I take my four-year-old grandson to that park,” he says. “I would not want to have to explain to him what those people are doing. It was just the wrong place for it.”

Christine Balog, lives nearby, she gives an account of what she saw,

“There was one grandmother there who was mortified,” say Balog, who snapped sometimes graphic pictures of the offensive behavior. “There was a lot of nudity and things that don’t belong on a public golf course.”

In one shot, she says, “a girl is spread-eagled over a golf cart, with a man looking up her skirt”. In other pictures, she says, “it appeared a sex act was being performed”. She said there were a lot of women’s tops coming down.

To see the CBS’s full investigation:

Thanks to CBS Chicago