Day realizes childhood dream and claims No.1 in the World Rankings. 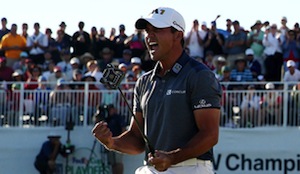 An emotional Jason Day, fulfills his destiny today by winning the BMW Championship by 6 shots and moving to the number 1 player in the official world rankings. His final round 69, was a bit up and down but a couple of late birdies gave him the breathing space he needed to secure the title, his 4th victory in his last 6 starts.

Day’s dominance did not come on some dog track against a weak field. This event featured the top 70 in the FedExCup standings and a loaded leaderboard that included Rickie Fowler, Jordan Spieth, Rory McIlroy, Dustin Johnson and Justin Rose on the first page all weekend. It’s just that all those world-class stars were clustered in some sort of “B division” five, six and seven shots back of Day.

How sweet it is. Thank you everyone @BMWchamps & also my entire team. #WorldNo1 Been an amazing ride! Onward to more! pic.twitter.com/pQAbbAXb2Z

With the mentoring role of his good friend, Tiger Woods he now seems well placed on and off the course to take his game to a level that will be very difficult to match. His hunger, intense concentration and his ability to close out tournaments is now a feature in his well-rounded game.