The best way to score is from being in the fairway as often as possible.

Those low scores we long for every week are usually made a lot tougher to achieve by missing fairways, and not giving ourselves the best chance to play the hole correctly. Whether it means attacking a par-5 with the driver or setting up a short par-4 with an iron, it is important that we aim to finish on the fairway as often as possible.

Below is some great tips from some well known players and coaches. 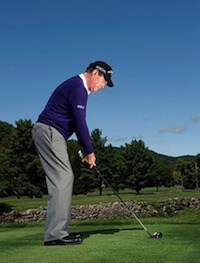 1. Don’t reach for the ball – Tom Watson believes that some players stand too far from the ball on the tee, resulting in tense shoulders and slicing the ball. To correct this, Watson advocates, “Get in your swing posture, and let your arms hang freely. Then bring your hands together. That’s where you should grip every club in the bag. You want to be looking in at your hands, not directly down at them. The distance you stand from the ball will change automatically depending on the length of the club. The longer the club you’re holding, the farther you’ll stand from the ball.”

2. ‘Roll’ and ‘Reach’ through impact – While a slice is bad enough on its own, that slice can get worse if you pull in your arms on the downswing. An easy fix, according to Erika Larkin, is to “roll” and “reach” as you swing through. “Let your forearms roll over to square the clubface and then reach your arms toward the target. You can get a feel for this full release by hitting some “bunt” shots with your driver. Tee up a ball and take your driver back until the shaft is parallel to the ground and the toe of the club points straight up.” 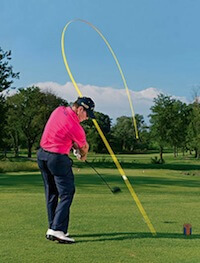 sual shot shape – Though it might make sense to curve a tee shot on a dogleg-left, for example, taking your usual shot will keep your ball in the fairway. According to Tom Watson, you can use the tee box to help with your natural shot. “If you slice or fade the ball, tee up on the far right side of the box, near the marker. If you hook the ball, tee up on the far left side. It’s OK to stand outside the markers as long as your ball is between them. This teeing tactic gives you more room to curve the ball into play.”

4. Swing straight back – A common belief is that to fix one’s slice, you should swing in to out. David Leadbetter says that, rather than applying this on the backswing, it should be on the downswing. “In to out is a downswing thought, not a backswing thought. As you swing back, try to create some room for the club to move on an in-to-out path coming down. To do that, keep the club in front of your torso as long as you can going back.”